The immensely popular singing trio provides an extremely pleasant eighty minutes of musical nostalgia – with plenty of full-length performances but also the full variety of their music through the years. Interviews with the principals give us the back story, light but not superficial, while film clips show their political activism through the years. 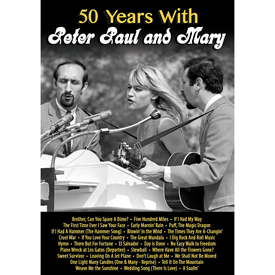 When we watch movies about music groups we can be looking for historical and personal insights, or we could just want happy nostalgia, to hear the music and see our favorites as they appeared through the years. Many of us instantly recognize groups from the 1960s when we hear them, but can only remember what they looked like from photos on record albums. 50 Years with Peter Paul and Mary finds a good compromise between the two poles of interest. The 80-minute docu does indeed tell their story across five decades but it’s also mostly performances, as recorded at different times. Peter Paul and Mary were everywhere on the radio and we know what they look like performing, but they weren’t ubiquitous. I’d say that they were definitely one of the most visible folk groups, even if Television preferred clean-cut apolitical trios. 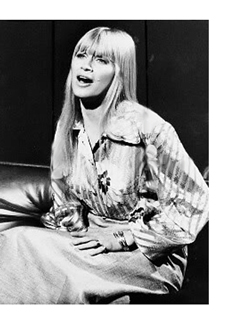 Springing from the same New York counterculture roots as folk like Bob Dylan and Joan Baez, Peter Paul & Mary carried on the Woody Guthrie tradition without a heavily political edge, at least not on the surface. As seen in the docu they did indeed perform on the forefront of various causes and movements. Back just ten years in 1951 or so, simply being pro- union and pacifist was enough for The Weavers to be blocked from radio and TV.  PP&M avoided that problem mainly because the witch hunters had been tamed somewhat by the arrival of the Kennedys. It was as if some kind of media compromise had been made. The three singers looked terrific on stage. The two men played it straight, and their friendly smiles and gentle voices posed no threat. Mary Travers set the style for the ’60s folk diva — an animated singer who moved with the beat and tossed her hair in a natural, naturally sexy way that made her seem powerful, elemental. No elaborate costumes were needed — Mary’s hair was always the same, perfect whether still or windblown.

Although PP&M sang the protest standards, it was always in a positive mode. Their cover of “If I Had a Hammer” is still the most exciting; it doesn’t get old as do some other basic folk songs. Although they showed up for major Civil Rights gatherings — they sang at the big Washington Marches — and even anti-war protests they weren’t demonized by the media as was John Lennon, who was denounced for being anti-war, marrying an Asian and saying the Beatles were more popular than God. I suppose the reason is that PP&M weren’t outspoken like Lennon or even Joan Baez. For the most part they just sang the songs.

The clincher for American approval was one song that was so popular they would have been forgiven anything. “Puff the Magic Dragon” became an instant classic, a kiddy necessity. And it’s a great song, too. 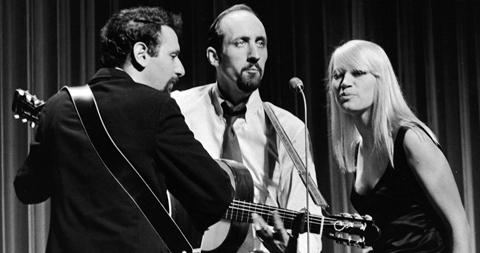 50 Years with Peter Paul and Mary has a name director in Jim Brown, who made the wonderful The Weavers: Wasn’t That a Time (1981) and has done docus and TV specials with Harry Belafonte, Pete Seeger and lately, The Highwaymen. The show appears to be an ‘inside job’ made with the cooperation of all three singers and family members. Mary Travers passed away five years before so her interviews must have been on file. It’s possible that much of the show was shot earlier, if not all of it.

The show alternates old video and film of the group performing. Fans will be happy to see the three at every stage of their careers; many performances are either full length or long enough to avoid the frustration of ‘choppy clip syndrome’. Nothing’s worse than a docu that feels like a promo for itself, with just a taste of this and a peek at that. I was naturally drawn to the earliest material to see whether all parts of their act were present at the beginning. The answer is yes. As touted on the disc package, some of the earliest performances are from a BBC program said to capture the trio at its best.

There’s no denying that Travers is eye candy yet her stage personality projects a sense of well-being, not vanity. We just like her. There’s also no hint of any favoritism between the trio, or hidden romantic vibes. There’s a lot of love there but it’s all for the audience. 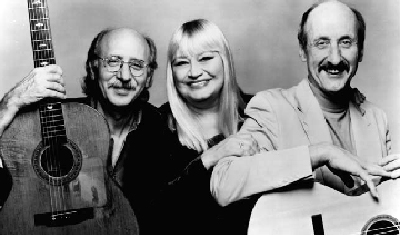 In the interviews all three singers are outgoing and friendly almost to a fault. They don’t joke too much yet seem completely happy and at ease… not too mellow but not pushing their message either. They are what they are. The interviews and occasional narration remain light, downplaying the negative. Each singer describes his/her partners in positive terms, warmly — any grudges seem to have all been healed. At the beginning it’s funny to hear how Mary Travers was recommended to join Paul and Peter with the caveat that she might not be able to commit to the group. A liberal Greenwich Village child, she had already been singing for six years and had recorded with Pete Seeger. The group was a big success from the get-go.

Although other folk appear as interviewees, even ex-spouses, the show doesn’t get deep into personal lives, marriages, religion, etc. It also barely acknowledges the 1970 breakup for solo careers, which lasted eight years. We stick mostly to documentation of their singing in support of charities and causes, which they threw themselves into without reserve. We see them traveling to Central America, for instance, to protest American intervention there.

The mostly- music format moves the show right along until the final chapters, which deal with the passing of Mary Travers in 2009 and indulge some afterglow remarks about her legacy and that of the group. It’s all respectful, non-maudlin and upbeat — and entertaining. 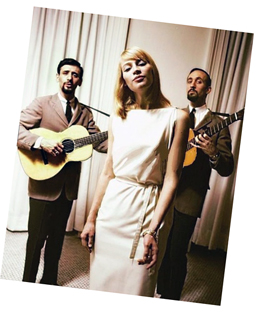 MVD Visual’s DVD of 50 Years with Peter Paul and Mary is a good SD encoding of a show pulled in from various sources. The quality is good at all times and the audio mix is excellent. It’s particularly nice to see so much variety from the early days, from folk festivals and many TV appearances. I would guess that if you remember them from some network broadcast in the middle ’60s, it might be represented here. Several songs are heard more than once, at least in part, but there’s no lack of variety.

The disc comes with some bonus songs as extras.

The encoding also provides removable subtitles, but on my player they weren’t functioning properly — they’d pop up early, as if incorrectly sequenced. The disc seems a small-scale production… was it perhaps mastered in a home shop?