A “lesser” Mario Bava is still a fountain of great filmmaking; and this annihilating melodrama sees a score of greedy folk wiped out at an island retreat, for fun and profit. Shot (and stabbed) through with Bava’s visual imagination, it’s a sexy, memorable murder thriller. With an authoritative Tim Lucas commentary. 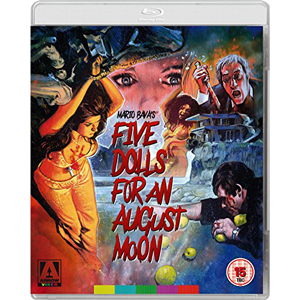 The experts say that Mario Bava kicked off the giallo parade with his 1964 Blood and Black Lace; here six years later he’s rushing out a body-count thriller to chase the success of Dario Argento’s Bird with the Crystal Plumage. 1970’s 5 Dolls for an August Moon was once one of his more elusive titles, and not considered one of his best — it never received an American theatrical release. Polished up in this Blu-ray presentation, it will have no problem pleasing Bava’s fans.

The story throws together some ambitious, decadent Italians at a wild weekend retreat at a rich man’s beach house on an isolated island, and lets the murders go forward. Various investment speculators try to talk scientist Gerry Farrell (William Berger) into selling them the rights to a new formula, while. As the competitors try to elbow each other out with secret bids, Farrell seems disinterested, and tempers rise along with the stakes. The wives and girlfriends enjoy the fun and games but feel the tension as their men stray, or try to get them to use sex to close a deal. More than one sex relationship is a secret, like the love of Farrell’s wife Trudy (Ira von Fürstenberg) for another wife, Jill (Edith Meloni). But once the murders begin, the possibility of anyone trusting anyone is left far behind.

Allegedly a professional assignment given Bava with just two days’ notice, 5 Dolls for an August Moon is a fair murder mystery in which even this director’s visual tricks can’t completely sustain our interest. The cast of connivers is interchangeable and hard to keep straight, and in some cases most easily identifiable by their now-garish 1970 fashions. The Agatha Christie-style succession of murders among a select group of villains is just as boring as Bava thought it would be when he took the job. Shying away from depicting on-screen most of the actual killing, Bava tries to divert attention through interesting set pieces, the best of which is a shower of glass balls that transports us from one tense situation, to a suicide in progress on the other side of the house. Yet even it reads better in print than it plays on the screen. Even a giallo needs to make us care about the victims. Well, a little.

The actors do rather well with characters that reach top tension and total cluelessness early on, with no opportunity to vary the mix. As in most haunted house movies, even as the corpses pile up, there’s still a tone of business as usual, with people seducing one another or wandering off on their own, little troubled by the fact that an implacable killer is on the prowl. In Ten Little Indians the participants/victims at least undergo major behavior changes. Perhaps Savant’s a bit rough on this point, as the light tone combined with the stylish killings is what the show is all about.

There are plenty of indications that the movie was meant to be sardonically funny, a black comedy of ‘little murders’, and certain touches carry out this line of reasoning. But the garish tastelessness of the extended ‘party’ sequence that begins the film doesn’t convey to this viewer what critic Tim Lucas interprets as Bava’s Godard-like sense of ‘contempt’ for the assignment… it’s just an inadequate scene, one of several. The film’s single most effective running gag is the series of accelerating cutbacks (with an amusingly repeated jazzy theme) to the refrigerated meat locker, where the saran-wrapped corpses hang in a line like clothing in a dry cleaners’. But a fun cat ‘n’ mouse game can’t materialize when so little information is offered to engage the audience. The final revelations and twists pack little irony, or even surprise.

This time out Bava jazzes things up — and pads the movie out — by taking advantage of the skills of his ace cameraman Antonio Renaldi. Numerous scenes begin with telephoto-lens pans over tide pool rocks or bits of décor in the fancy house, or explore the bodies of the actresses, before zooming out perhaps twenty seconds later so that the scene proper can begin. The images are always attractive, but the device seems a lazy way to maintain a kinetic feel when nothing is happening. On the other hand, when he has a key master shot to show off, Bava’s work is just as lush as anything in his other contemporary pictures. Bava’s instincts on how to deliver the glamour imagery are undiminished — his shots with nudity are alluring without coming off as crass. 5 Dolls can be rough, but it is always classy.

As it is not one of his ‘delirious’ gothic pictures, 5 Dolls has few of the extreme primary-color shots that grace Bava’s earlier work, and the slightly later Baron Blood. Unfortunately, the lushly shadowed portraits in the main poster art make one expect the visual intensity of Blood and Black Lace or Black Sabbath. His most over-used effect, the addition of a house or a castle to a beach hilltop via a foreground glass painting, is less convincing here than elsewhere: In one instance, the reflection of an actress can be seen in the glass, hovering in a stage wait and still reflected as she exits. This unusual flub is only one symptom of production haste — Bava’s magic-trick effects are normally hard to spot.

We also see another unwelcome pattern forming. For every handsome trucking shot or deliriously caressing close-up, there are two unwelcome, debasing smash zooms. Early detractors of Bava had solid ammunition as soon as he began adding empty kinesis to static shots by overworking his zoom. 5 Dolls has a particularly trashy multiple smash-zoom right off the top. There are fun thrills to be had here, but the viewer must be a bit more attentive and patient than normal for Signor Bava.

Arrow Video’s Region B Blu-ray + PAL DVD of 5 Dolls for an August Moon is an eye-opening scan that vastly improves on Anchor Bay’s DVD from about ten years ago. The new disc quality is said to be almost identical to Kino’s Region A Blu from 2013. Those widescreen interiors of the beach house look marvelous.

Of special note is the fact that Arrow’s disc has a clean new re-mastered Italian soundtrack, which adds to the enjoyment of the jazzy lounge score by Umilani, which can also be heard on an Isolated Music and Effects track. The subtitles are also said to be new, and more accurate.

Tim Lucas’ excellent commentary is reportedly repeated from the Kino disc. Near the beginning he spells out the names of all the characters and the actors that play them, making things a lot easier for flippant reviewers with short attention spans. Lucas delves into the complications of what suddenly became a much more problematical production climate for Bava, when he found himself making films that interested him less, and made him follow trends instead of initiating them. Lucas’s details on the shoot, the actors and production personnel, puts the movie in an entirely different light. It now comes off as more than just a preamble to his much bigger hit A Bay of Blood.

The other main extra is a featurette overview of Bava’s career, hosted by Mark Kermode and given input by Joe Dante, John Carpenter and Tim Burton. It’s from 2000 and an hour long; I remember wanting to see it back then, when it was only available in England. Along the way we get excellent input from Tim Lucas and Kim Newman (both fifteen years younger!). Less inspired bites are offered by Carpenter and Burton, who tell us unhelpful things like, “his movies are like dreams.” Dante nails the unavailability factor that once stymied our desire to see Bava’s work — I remember when Jim Ursini told me that he couldn’t find enough decent documentation, even in Italian, to nail down all of Bava’s credits… many listings included Bava as the producer of Seddok, l’erede di Satana, because the real producer had taken the on-screen name Mario Fava. It’s true, in the 1970s we’d scour the movie logs from Orange County to Bakersfield to see if a Bava or Freda film was enjoying a stealth drive-in screening.

Check out Nathaniel Thompson’s Mondo Digital coverage of this title — he has more technical details about Arrow’s revisit. 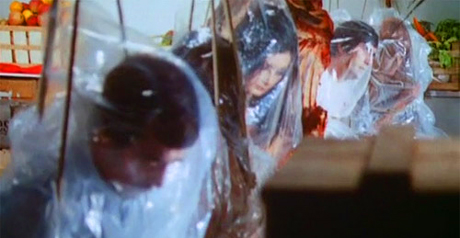