Long before movies routinely created ‘worlds’ with their own twisted fantasy logic, only a few paranoid thrillers, usually odd genre items, tried out twisted stories of deceptive ‘hidden realities.’ Like an extended Twilight Zone entry, this lively James Garner war pic morphs into a bizarre conspiracy worthy of Philip K. Dick. If only it weren’t so “L-A-O” — Literal And Obvious. 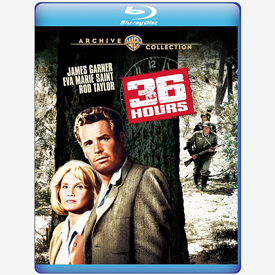 Released in 1965, 36 Hours is among the last batch of studio pictures produced in B&W. The oddball story would appear to have been spawned by author Roald Dahl brainstorming on weird wartime spy pictures like The Man Who Never Was and I Was Monty’s Double. In this case the mix seems to have been influenced by Philip K. Dick! The story bears superficial similarities to Dick’s story I Can Remember it For You Wholesale, right down to the patsy hero being given a ‘wife’ who is really a sinister babysitter. 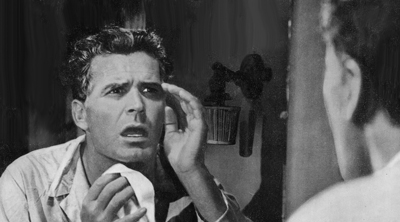 The first 3/5th of 36 Hours is a terrific thriller, a war-spy picture that almost feels like a science fiction movie. Unfortunately the execution is too linear and predictable to fully exploit its exciting concept. Director George Seaton made some great entertainments, and also some pretty dull pictures. He eventually forgets what kind of movie he is making and re-boots it as a limp escape film. But we like the stars and we like the (initial) concept. It certainly rates points for trying to be different.

Five days before D-Day, Intelligence expert Major Jeff Pike (James Garner) is sent to Lisbon as a ploy to convince the Germans that the invasion is not imminent, and to trick them into thinking that it will take place at Calais, not Normandy. Nazi agents immediately drug him and whisk him away to a secret German compound near the Swiss border. He’s placed in the care of Nazi doctor Major Walter Gerber (Rod Taylor) and carefully prepped before he’s reawakened. It’s all part of a ruse to make Pike think that five years have passed, that it’s 1950 and he’s had a long bout with amnesia, including marrying one of his nurses, Anna Hedler (Eva Marie Saint). The idea is to get Pike to confirm where in France the D-Day invasion will take place. Gerber’s compound poses as an ‘Allied Occupational Hospital’ complete with fake newspapers and radio broadcasts. Anna is an Auschwitz survivor cooperating to save her skin. Major Gerber is actually a sincere researcher whose useful work has been redirected by the German war effort. He’s hounded and threatened by a Gestapo bully, Otto Schack (Werner Peters of The 1,000 Eyes of Dr. Mabuse). If Gerber doesn’t get results in 36 hours, Pike will be turned over to the torturers. Pike is living in a confected bubble illusion, much like Truman Burbank. 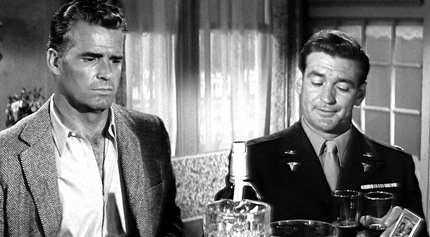 This is a great idea written and directed slightly below its potential. George Seaton and James Garner may have sold the high-concept 36 Hours to MGM because it would be cheap to produce. The imaginative story combines Allies vs. Nazis thrills with something akin to The Sting: will poor confused Major Pike see through the elaborate con, or will a sneaky enemy trick turn the tide of the war? Unfortunately, the dull George Seaton almost kills the story by pitching it at a level that a 12-year-old could figure out.

36 Hours operates on the principle that everything that happens needs to be explained before the fact. We’re never allowed to identify directly with Major Pike’s experience because we’re told exactly what’s going on while he’s still asleep, being prepared for the charade. True, a real puzzle picture like Memento would probably sail over the heads of an average 1965 audience. The 1967 Curtis Harrington head-scratcher Games threw most viewers, as did John Frankenheimer’s The Manchurian Candidate, another movie that didn’t fully explain its weird narrative mysteries. American audiences also had little patience with the mysterious Seconds, another ‘far-out’ mystery that asked viewers to pay attention and question the reality presented on screen. 36 Hours would have been a knockout if we spent the first afternoon at the hospital experiencing Pike’s disorientation along with him. Then, as his mood slowly turned to paranoia, the big jolt could be revealed. Yes, I know that nobody asks feeble reviewers to re-write movies, but I’d rather have fifteen minutes of mystery in Act Two, than an Act Three that falls limp. In 1965, a big pull-the-rug-out-from-under-the-audience ‘plot twist’ movie could still work. M. Night Shyamalan has laid an egg with too many of them. 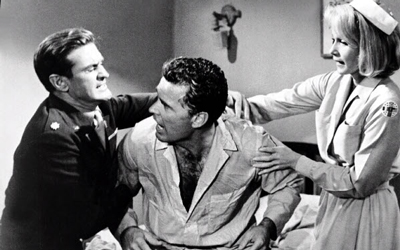 With certain exceptions (Miracle on 34th Street) George Seaton made so-so films that could have been much better. Once every ten years or so, he hit the jackpot with a giant hit like Airport. His handsomely cast and produced The Counterfeit Traitor is too long and too lumpy, and loses all sense of the wartime period. 36 Hours also doesn’t feel like 1944, what with James Garner walking around in a modern suit of lightweight material.

Spoilers are impossible in 36 Hours as the script itself does all the spoiling, and doesn’t allow us to work on the puzzle for ourselves. We’re told before the fact why Pike hears only the rigged radio station, and how they have altered his eyesight. There’s no room for accident or improvisation. When Pike cuts his hand in the first scene, it’s ludicrously obvious that a crucial plot point is being set up. The only real suspense is wondering when the Germans posing as Americans will screw up. Rod Taylor has a tough illusion to maintain that the script barely touches on. We’d like to know more about his ‘actors.’ The movie could get a lot of mileage from their strange situation, coaching each other to appear more convincingly American. What if one of them doesn’t know what the Brooklyn Dodgers are? 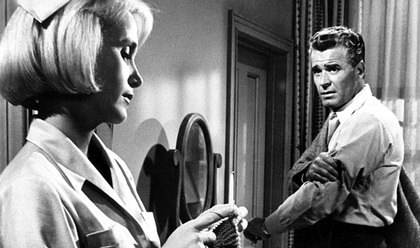 Roughly the first half of the movie is fun anyway, as the bold concept invigorates the brain cells like a good Twilight Zone or Alfred Hitchcock Presents. Then Seaton undercuts his own story. Since the devious medico Rod Taylor needs to become one of those basically ‘good’ Germans, we’re given a cardboard sniveling Gestapo to serve as a villain, the kind that can’t do a thing without first declaiming his underhanded motivation to the audience. The acting is fine, but the characterizations are weak. Eva Marie Saint comes in with an unnecessary, poorly integrated concentration camp subplot that verges on bad taste. Her Anna Hedler will ‘do anything’ to stay out of Auschwitz, where she had been abused as a sex slave. She cannot cry because all the humanity has been beaten from her. Yet Anna is capable of playing a role where she’s asked to be as charming as Grace Kelly. When Anna shrinks from Major Pike’s touch we learn the ‘true’ price of Nazi villainy: honest movie stars will be too traumatized to be good screen lovers. Don’t worry, Jeff Pike will show Anna Hedler how to shed tears again.

I wouldn’t be surprised if someone told me that the original concept for 36 Hours was more of a Seconds – like subjective account, where we weren’t let in on the mystery from square one. I can just see the MGM brass asking Seaton to stop being so arty, and just tell the story so a kid could follow it.

James Garner is terrific. He animates and elevates the material every step of the way, overcoming the toughest plot twists with a bewildered look or a sidelong glance. This was perhaps the point where Garner’s career stalled. He was a high profile name but none of his solo starring pictures were high-profile hits, not even the terrific The Americanization of Emily. He eventually had to slip back into ‘Maverick’ mode in western comedies, and return to TV as the popular Jim Rockford. 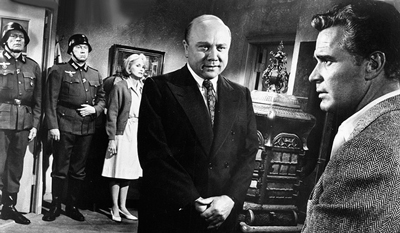 At about the ninety minute mark, all of the film’s (very good) secrets and twists are out of the bag, and 36 Hours needs to find a clever way to wrap itself up. It instead spends a completely superfluous final thirty minutes watching Garner attempt an overland escape to Switzerland. The Major Pike – Anna Hedler relationship enters a new phase, as if a new story were beginning. New characters are introduced, and it doesn’t help when actor John Banner shows up, reminding us of Hogan’s Heroes. Frankly, we’d almost rather see Major Pike and Anna steal a plane and fly to safety, the cliché story solution for scores of vintage anti-Nazi spy movies. But Garner had just done that in The Great Escape. Interestingly, the truck that delivers Pike to the secret German compound crosses a landscape that’s a dead ringer for the green valley in The Great Escape. They should have added a motorcyclist in a torn sweatshirt, heading the other way!

36 Hours can boast a different and exciting concept, especially for the year it was made. It was a real brain-twister when new, and is still quite entertaining. My reservations are simply that it held the promise of being much, much better. The New York Times’ Bosley Crowther found the whole thing synthetic and unbelievable — in a year crowded with preposterous Super Spy fantasies. I should think that audiences would accept 36 Hours as low-key and realistic, compared to things like Goldfinger. 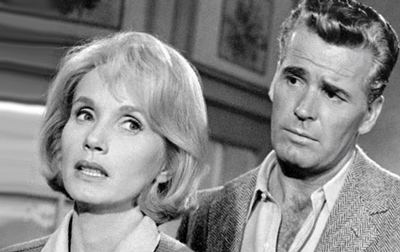 The Warner Archive Collection Blu-ray of 36 Hours is a flawless transfer of this B&W show. Only a few months later, color would be the rule for all studio releases. Fans of B&W ‘scope movies shouldn’t expect too many dynamic compositions, as director George Seaton doesn’t do much with his visuals.

A big asset is the music score by Dimitri Tiomkin, which boils and bubbles with nervous Guns of Navarone– style orchestrations in transition scenes. It single-handedly raises the film’s tension level, telling us that something important is going on. The WAC’s only extra is an original trailer.