Being called the French Hitchcock does Claude Chabrol a disservice, as his dark thrillers approach mystery and suspense almost completely through character, not cinematics. These three very good 1990s productions are completely different in tone and approach, and each showcases a stunning French actress. 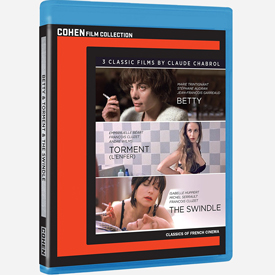 Not all Claude Chabrol films are equal, but the level of engagement in his unique stories stays consistently high. When his best pictures click, there’s nothing like them. The mysteries are deep into personality studies, and often the suspense is in trying to figure out what a person is thinking, not what they’ve done. Some of Chabrol’s best stories seem to have been generated by studying people in restaurants, wondering about what kind of lives they lead.

One of the shows in the Cohen Group’s Blu-ray set of 3 Classic Films by Claude Chabrol is a Chabrol original, one is an adaptation of a novel by the classic série noire author Georges Simenon and the third is Chabrol’s take on a 1964 script abandoned during filming by the great Henri-Georges Clouzot. I’ve seen a stack Chabrols by now but still have more than twice that number to go if I’m ever to catch up. They’re all intelligent, but all different. Right off the top I highly recommend Les Bonnes Femmes, Violette Noizère, Le Beau Serge, The Nada Gang and Story of Women. If only all Chabrols could be given video transfers as beautiful as these three from MK2 diffusion. 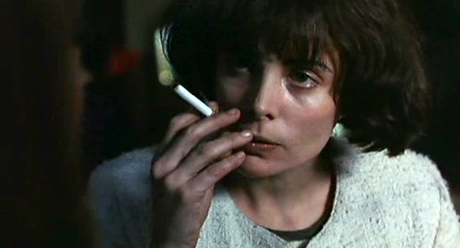 From 1992, Betty is an absorbing character study about a disturbed woman. Disoriented pampered wife Betty Etamble (Marie Trintignant of série noire), is first seen on an alcoholic bender. She’s picked up in a bar by a strange ‘doctor’ and taken to a Versailles restaurant called ‘The Hole.’ As it turns out, the place caters to misfits and oddballs (with money). Betty’s host is taken away, and she meets Laure (Stéphane Audran), a wealthy widow who lives in a nearby hotel and also owns a luxury apartment in Lyon. Laure installs Betty in the room next to her own, and tends to her alcoholism and depression with kindness and discretion. Both women have stories to tell about their odd circumstances and Betty’s chaotic behavior and troubled married life. She warned her husband that she was sexually uncontrollable, but it did no good.

Betty is a fascinating show despite not having any of the generic things we expect — no blackmail, no physical cruelty, no murders. As with the story Thérèse Desqueyroux, revelations about Betty’s background show her to be trapped in a domestic role incompatible with her nature. He husband loves her but now only as a symbol, as the mother of his children. A demanding mother-in-law controls everything Betty is barely allowed to spend time with her own children — nannies do everything. Betty turns to outside affairs for emotional sustenance. The real suspense comes as we wonder what’s going on with Laure’s out-of-nowhere concern and care for Betty. Are there any ulterior motives in the air? The character study of these two wealthy but aimless women is fascinating. In some ways their relationship reminds this viewer of a less stylized counterpart to Robert Altman’s Three Women. Yves Lambrecht is Betty’s in-control husband, and Jean-François Garreaud is the manager of ‘The Hole,’ who seemingly has a special relationship with all who pass through his doors. 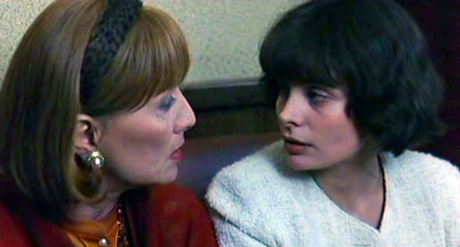 The cultured Stéphane Audran had been divorced from Chabrol for twelve years but continued to serve as a frequent star in his pictures. Marie Trintignant is simply amazing in this picture, inhabiting the confused yet serene Betty body and soul. Her drunken state is one of the more convincing I’ve seen in movies — her eyes simply become lazy and her smile unfocused. We keep wondering if Betty is going to double-cross Laure, or if Laure has some strange plan for Betty… the opening of this picture, with a stranger driving a woman to a distant location, is very much like Georges Franju’s Eyes Without a Face.

For most of his career Chabrol directed at least one movie per year; and his personnel are often the same. All three of these films use the same editor and producer and the same composer (Chabrol’s son Matthieu). Chabrol’s pictures have a surface beauty and a tone that I’d call Unstressed but Alert. He’s not constantly telling us that trouble is afoot, but we find ourselves straining for clues anyway. 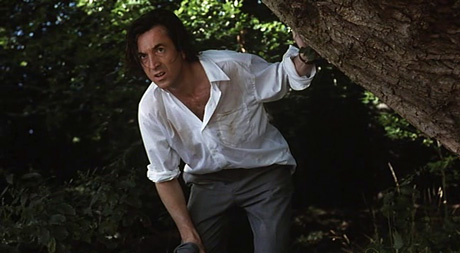 Torment (L’enfer) is the darkest picture of the three: straightforward, powerful and an emotional ordeal. Henri-Georges Clouzot’s earlier attempt to film the movie, abandoned after he suffered a heart attack, has been documented in a feature film that assembles footage filmed but never screened; it’s especially memorable for some startling lighting effects for special scenes with its star Romy Schneider. Chabrol’s version does without these abstract hallucinations, but he’s made a harrowing success on its own terms.

Once again a superb actress is the center of attention, Emmanule Bért is the stunningly beautiful Neily, who begins a fairytale romance with hotelier Paul Prieur (François Cluzet), has a perfect child and lives a glorious life next to a sunny vacation-spot lake. But this perfection all goes to hell when Paul becomes jealous over Neily’s spending with Martineau (Marc Lavoine), a handsome local mechanic. The jealousy becomes so all-consuming that Paul literally loses his mind, tormented by visions of his highly desirable wife betraying him. After a while Paul’s irrational fears become a self-fulfilling prophecy. When Neily loses her sense of humor about his constant accusations, he just becomes more certain that she’s cheating on him. There’s no relief as their relationship spins out of control. 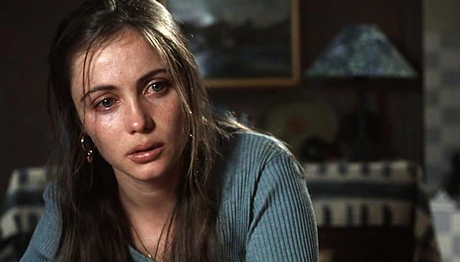 Chabrol is totally in control, with a story that could happen anywhere, in any time period. It’s the sad old tale – Paul can’t handle the fact that Neily is so attractive. In his twisted view of things, he honestly believes that she can’t be faithful to him. The previously great-guy Paul loses his grip on reality, imagining things that don’t occur. The mania progresses through stages, until his persecution reaches madman-level severity. It’s punishing to witness. None of the horror seems necessary.

Emmanuelle Béart and François Cluzet turn in flawless performances, with Béart especially noteworthy. Although saying so falls into the same trap Paul did regarding attractive women, she sometimes seems too beautiful to be such a good actress. Neily is gorgeous but simple, and Paul is at first genuinely deserving. They begin with a positive worldview that seems heavenly. To see them suffer is a real ordeal.

Chabrol makes excellent use of a terrific small hotel setting, on the edge of a beautiful lake. As in his best movies, his direction reaches not for Hitchcockian suspense tricks but simply bears down on the characters, so we forget we’re watching a movie. 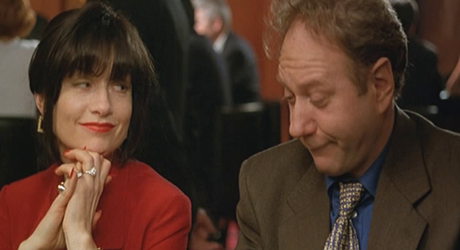 I reviewed the 1997 The Swindle (Rien ne vas plus) from a 2006 New Yorker DVD that was adequate but no beauty. As with the other two pictures, this transfer is a major improvement over what we were seeing in the past. Chabrol’s original story is a more conventional game of trickery among small-time con artists. The plot is a guessing game that gives us little certainty about anything — we don’t even know what the exact relationship is between a pair of enterprising partners in thievery. The Swindle could go in the direction of light comedy or turn into an ironic bloodbath, a possibility that keeps us on our seats throughout.

Betty and Victor (Isabelle Huppert and Michel Serrault) run a careful con-and-theft racket, fleecing unsuspecting marks at swanky hotel conventions. Betty pulls Victor into a much riskier caper of her own devising — separating corporate treasurer Maurice (François Cluzet) from the five million francs he’s already stolen from his employers. The trick is that it’s not clear who is being tricked, Maurice or Victor. The trio flies to the Caribbean island of Guadeloupe with the booty in tow — and is intercepted by thugs who may or may not be agents of Maurice’s old partners. The fate of the five million will be determined by an elaborate game of switcheroo with fancy attaché cases.

The Swindle harks back to ‘gentleman thief’ thrillers where nobody trusts anybody’, like the old Ernst Lubitsch romantic comedy Trouble in Paradise. The secret to sexy thievery is that no matter how hard one tries to give the impression of heartless avarice, higher motives prevail. The guilty pleasure of crime is equated with the guilty pleasure of… pleasure. 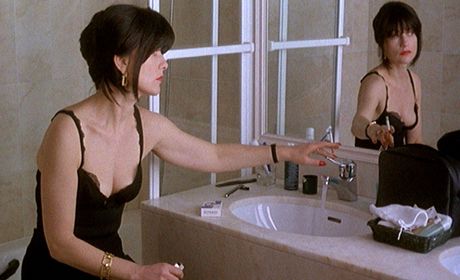 Chabrol keeps the wit high and the temperature cool, as his trickster pair dodges the slings and arrows of their profession. Just being recognized in the wrong place by the wrong people could spell disaster. They must stay on the move and keep changing names, obviously, choosing casinos and hotels far from their Paris home base. The much older Victor is never at a loss for words, but must literally dive under tables to avoid the advances of a scary Italian widow (Mony Dalmès). Victor’s professed secret to success is to not be too greedy. Having drugged a poor mark, Betty is ready to clean him out. Victor takes only a portion of the man’s ready cash. When their victim awakens, he’ll be too concerned about having his infidelity discovered to notice what’s missing from his wallet.

Betty and Victor’s cozy relationship goes haywire in a game with a prize of millions instead of thousands. Movies of this kind rarely reverse their twists more than twice, but knowing Claude Chabrol we can be sure that something completely unexpected will happen. Reading the characters doesn’t work because we don’t even know the exact relationship shared by Betty and Victor. Are they lovers, or is he her father? They’re such experts at hiding their feelings that we can’t be sure of their reactions, and they can’t be sure of each other’s, either. Betty’s chameleon-like surface is as deceptive as the alluring wings of the dancer hired to entertain the dentists at the Alpine resort.

Just as things are going bad and they’re being manhandled by ruthless gangsters, we remember Victor’s earlier lesson about ‘keeping things fun.’ The big-time beckons, and this delightful odd couple fall into the trap just like the sucker they have adjudged Maurice to be. We don’t know if they’re going to get themselves out. In fact, we don’t know who exactly is in the trap and who is not.

The unstoppable Isabelle Huppert is still going strong now, and she’s at the top of her game here. Michel Serrault will be best known to Americans from La cage aux folles. 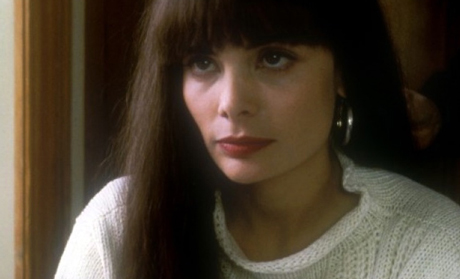 The Cohen Group/The Cohen Collection’s Blu-ray set of Betty, Torment (L’enfer), The Swindle is a beauty, with three flawless encodings of these attractive pictures showcasing three impressive, distinctive actresses. Colors are rich and cool as we expect in French films; Chabrol’s technical mastery is so good, his directing technique is all but invisible.

All three features come with trailers, and the second two are given in-depth commentaries by Wade Major & Andy Klein, Chabrol-philes that know their subject well. The Swindle has an interview extra with the actor François Cluzet. In Torment Cluzet often seems to be doing a neurotic Dustin Hoffman impression… but with a completely different French approach.