What’s this? John Ford’s last silent western is as exciting and entertaining as his later classics. A trio of horse thieves turn noble when given the responsibility of a young woman lost on the prairie; Ford gives the show comedy, drama and spectacle. 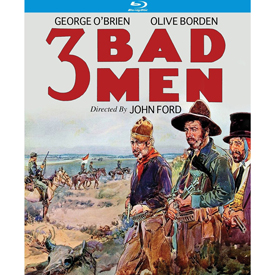 What a great discovery! Last year Kino brought us a good-looking disc of John Ford’s Hurricane and now they take the bold step of issuing one of the director’s oldest intact features, 1926’s 3 Bad Men. It’s a full-blooded western in high style, made with a large budget; Ford floats two or three sentimental stories around the idea of a corrupt town in the Dakota Territory, lovable outlaws reformed by a beautiful orphan, and a spectacular land rush. It’s a real gift from Kino, which has also given the disc a commentary by Ford authority Joseph McBride. The show features a starring performance by George O’Brien, but the film’s sentimental center is a big-lug bad guy played by the now-obscure actor Tom Santschi.

1877. Fortune hunters and homesteaders converge on the border to the Dakota Territory, which has been taken from the Sioux. Gold rumors are in the air, so all the miscreants in the West have arrived as well. Lee Carleton (Olive Borden) and her father are en route with a string of racehorses to help them get a good claim in the land rush. Thieves Bull Stanley, Mike Costigan and Spade Allen (Tom Santschi, J. Farrell MacDonald, Frank Campeau) set out to rob the Carletons but instead drive off other thieves, and comfort Lee after her father is killed. Almost on the spot, Bull determines to keep Lee safe. She looks to Bull for protection, but he determines that she needs a ‘good’ man. That’s Dan O’Malley (George O’Brien), a happy drifter who picks up Lee’s cause as well, holding off the predatory, crooked Sheriff of the town of Custer, Layne Hunter (Lou Tellegen). As the date for the land rush nears, we learn that Bull’s need to help Lee is partly motivated by his grief over being unable to locate his lost sister Millie (Priscilla Bonner), who went off with a man on a promise of marriage. Violence between the sheriff and the God-fearing homesteaders breaks out just before the big land rush. 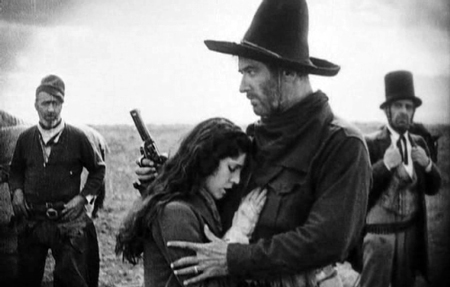 Although strongly identified as a maker of westerns, John Ford made almost none in the golden years of the 1930s. After 3 Bad Men in 1926, his next is Stagecoach, thirteen years later in 1939. 3 Bad Men is a highly entertaining attraction that shows Ford operating at his best. It’s all very recognizable — the historical background, a strong vein of light comedy, and an ease with big action scenes. There’s even a drunken journalist with a (semi-) portable printing press. Ford’s talent for composition and dramatic blocking is as good as ever. Most scenes use a minimum of angles. Ford rarely moves the camera, yet nothing seems missing. Ford also makes hash of screen direction, frequently crossing the 180-degree line without disturbing the spatial logic of scenes. It would be edifying to study how Ford gets away with this. I’d say that the 180-degree line rule is the bunk,iIf it weren’t for directors like G.W. Pabst. In Pandora’s Box I feel like flopping at least one shot in every scene, just to make the characters appear to be looking at each other.

What one remembers from 3 Bad Men are the bold performances. Big star George O’Brien’s Dan O’Malley is almost completely outside the main storyline. He contributes his charming good guy act and claims the girl at the finale. The three thieves are the focus; they’re an interesting variation on Sleeping Beauty’s three godmothers. Tom Santschi is the best thing in the movie. His Bull Stanley has the look of a standard villain, and turns moral without losing credibility. Olive Borden’s very un-assertive Lee clings to him for comfort after her father is killed, and he immediately instructs his confederates to stop stealing her property. Mike and Spade carry the comedy, while Buck takes on the role of seeing that Lee’s affections are transferred to a worthier man. The writers also give Buck a more sophisticated back-story, a search for his lost sister. Did he ‘go bad’ because his family fell apart? The sister & brother reunion issue helps move the story in a serious direction for its last act. Buck Stanley’s character conflict gives the show added depth, reminding us of the Colonel Mortimer character in Sergio Leone’s For a Few Dollars More — his sister was seduced and betrayed, and has become a prostitute saloon entertainer. Is Tom Santschi a proto-John Wayne figure, like John McGuire’s ‘Duke’ in Steamboat Round the Bend?

Frank Campeau and J. Farrell MacDonald make a fine pair of rogues, doing comic character business rather than slapstick. Ford and his writers make a big deal out of their harassment of a dude from the East, when the bad men make it their business to find an appropriate husband for Lee. Campeau is an engaging cardsharp with a stovepipe hat. J. Farrell MacDonald’s Mike wears the same kind of hat as Elmer Fudd. Every two scenes or so he flashes his pop-eye stare, with one eye shut and one eyebrow up. Campeau and MacDonald’s light comedy pays off in the dramatic climax, when the three godfathers take turns staying behind on the trail to hold off the bad guys. MacDonald is remembered as the homeowner in It’s a Wonderful Life who is angry because George Bailey has crashed his car on his property, damaging one of the oldest trees in Bedford Falls. 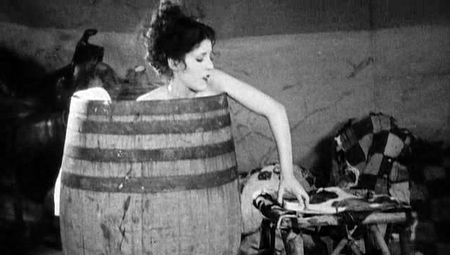 Ford is less interested in the female characters. Olive Borden’s Lee is idealized and uncomplicated and left to her own devices in scenes where she reacts to the antics of her protectors, or teases the slightly bumpkinish Dan O’Malley. Likewise Ford sets up Bull’s sister Millie (Priscilla Bonner) as a betrayed woman but keeps her at the periphery. Millie is little more than a prop in the final scenes, motivating her brother Bull but not confronting him. As an added treat, the show gives the beautiful Phyllis Haver a couple of fine moments as a flirtatious dance hall girl. Haver projects instant personality; she was Roxie Hart in the first screen version of Chicago (1927).

The villain (Lou Tellegen) is the least interesting character, so much so that we wonder if he was imposed on the movie. But that doesn’t affect the conflicts in the exciting finish. The land rush is almost as exciting as the one in Cimarron. The horse stunts and larger action pieces are impressive, as when the evil Sheriff rolls burning wagons down a hill, to smash into a house filled with people. One bit of action in the land rush is fairly disturbing — a real baby is used in a stampede scene, and is passed from a galloping rider to a man standing in a buckboard wagon also in motion. Curiously, we never see this baby returned to its parents.

Ford’s grasp of the essential dramatic situation gives 3 Bad Men a satisfying finale — it works as well as any later western feature, requiring no special adjustment for its age or lack of sound. Our three bandit heroes have already mentioned that their way of living has passed. They seem delighted to sacrifice themselves for the happiness of a heroine who really doesn’t seem to appreciate them all that much; being virtuous is apparently its own reward. Whatever happens, it feels good to watch the bandits play the role of heroes. Ford of course hit this same idea even harder in his two versions of the Sunday school fable Three Godfathers (1919 and 1948); William Wyler and Richard Boleslawski each remade it as well. Just for the record, J. Farrell MacDonald was one of the bandit-Godfathers in Ford’s first version as well. 3 Bad Men keeps its theme light and comes up with a very satisfying big-scale western treat for fans of John Ford. 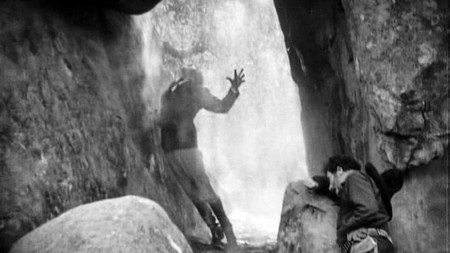 The KL Studio Classics Blu-ray of 3 Bad Men is an excellent encoding of this vintage Fox presentation. The show is well worn but intact; the image is often dusted with fine scratches yet plays quite well. We can appreciate the camerawork of George Schneiderman (The Iron Horse, Doctor Bull, Pilgrimage, Steamboat Round the Bend).

This edition has a new music score by Dana Kaproff for guitar and small combo, supervised by Christopher Caliendo and produced by Nick Redman for the big Ford At Fox DVD box that came out in 2007. It’s effective and flavorful, an interesting alternative to a standard silent movie music accompaniment.

A big boost for the disc is the commentary by John Ford biographer Joseph McBride, who seemingly knows the director’s work better than anybody. McBride discusses the film, the actors and this stage of Ford’s career in great depth, making the case for 3 Bad Men as a better film than Ford’s more celebrated The Iron Horse.

A trailer for Kino’s release of The Hurricane finishes off the package. 3 Bad Men is going to become a coveted disc for vintage film fans. A single scene tells that this is a John Ford picture. A preacher hefts a handful of dirt and says that the real riches of the Dakota Territory will be for farmers, not gold hunters. Of course, the Dakota Hills are represented by California’s Mojave Desert, where nobody can grow much of anything. It’s Ford’s ‘making the West bloom’ theme in its undiluted form.