Drug addicts! Who in 1970 really knew what life was like for them? Jerry Schatzberg, Joan Didion and John Gregory Dunne’s story of hell on the streets of NYC provided a stunning debut for Al Pacino — and should have done the same for Kitty Winn. It sounds too tough to watch, but it’s riveting. 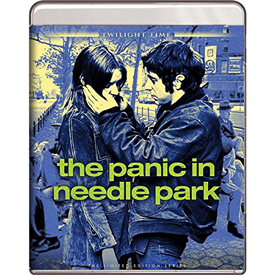 We all know how the 1970s upheaval in Hollywood brought new talent to film — actors, directors, writers and producers funded by studios but working completely outside the factory walls. Thanks to the new ratings system, the range of subject matter and frankness of screen presentation increased greatly. When creative people had something to say, the movies could be relevatory: Five Easy Pieces, The French Connection, MCCabe & Mrs Miller. One of the earliest features to earn the respect of the Hollywood establishment was Jerry Schatzberg’s The Panic in Needle Park, a story of heroin addicts on the Upper West Side of New York City. Director Schatzberg came from the fashion world and his first feature was a glossy item with Faye Dunaway about a model with emotional problems. Writing team Joan Didion and John Gregory Dunne were literary figures before they adapted James Mills’ harrowing book. Schatzberg is credited with launching Al Pacino’s film career by holding out for him when others wanted an established actor. Filmed in a docu-real style out on the streets, Needle Park is a realistic and affecting look at its subject. Even better, it puts a human outlook on the soul-crushing existence of addicts, for whom the need for the next fix is stronger than any personal bond. 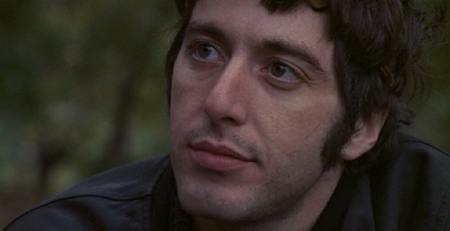 Neglected by her artist boyfriend Marco (Raul Julia), young Helen (Kitty Winn) meets and falls in love with dope dealer Bobby (Al Pacino), a charming, streetwise thief who has a heroin habit but doesn’t consider himself a junkie. Bobby is charming and considerate, and he has what looks like a loyal group of friends. The growing problem is the unease created by a dearth of ‘product’ available on the street. Bobby’s crowd is scrounging for a better supply and getting nowhere. Helen can’t stop Bobby from committing crimes with his burglar brother Hank (Richard Bright), who also shoots up; and she can’t seem to interest Bobby in any other lifestyle — he laughs when she suggests moving to the country. Helen sees how their ‘friends’ rat on each other, especially when backed into a corner by the opportunistic, seemingly ever-present narc Chico (Kiel Martin). With the ‘panic’ on, the dope becomes more expensive. Helen is deeply in love with Bobby yet starts using dope herself. She volunteers to turn tricks as a prostitute to support their $80 dollar-a-day habit. Bobby tries everything, even becoming a pusher for a gangster, but no matter what they do, they can’t get beyond the twilight existence of ever-mounting risk.

The Panic in Needle Park is just as much an eye-opener now as it was 45 years ago. It starts with an illegal abortion and proceeds to take in just about everything bad that can happen to street people scraping out an existence. Unlike earlier cautionary stories inventing scenarios about bad associations leading to escalating drug use and getting hooked, here it’s a nightmare where becoming a junkie seems inevitable. The reason these people are on the street starts with their disaffection with straight lives. Bobby comes from a family of thieves. Helen got tired of living with her family. The selfish artist Marco won’t commit so she gravitates toward Bobby, who loves her and gives her the affection she needs. The aimlessness and lack of values in this world is appalling. When Bobby OD’s, one of his ‘friends’ is only concerned with getting him out of her apartment, so she can service one of her regular Johns. The fact that the narc Chico is always informed proves that everybody snitches on everybody else; he routinely forces addicts to betray each other. The romance becomes pathetic when it becomes impossible to maintain any vow of loyalty. ‘Romeo and Juliet’ doesn’t work when Juliet can’t afford to be particular about whom she sleeps with. Without forcing the issue, the movie shows that the law does nothing for the addicts. Chico is clearly using them to build up career points.

Why does Helen stay? Holding down a job is impossible, and neither is letting the folks back home find out how she lives. One inspired day leads to the purchase of a puppy and the hope of a better life, a positive effort that barely lasts an hour before the dream bursts. The horrified Helen sees that she can’t be responsible for anything, that she’s worthless as a human being. Yet the story emphasizes that these are basically nice people, who want to harm nobody. 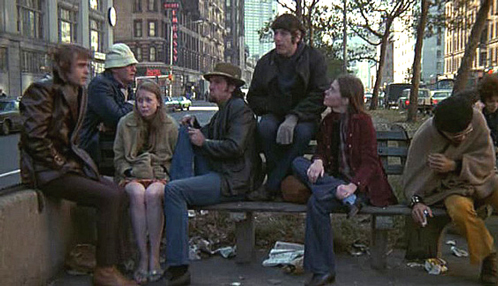 Although the show wasn’t a financial hit, the industry recognized it as a terrific accomplishment. The previously unseen Al Pacino and Kitty Winn are remarkable. With his magnetic personality, Pacino shows us how attractive a guy like Bobby might be to a woman ready to settle for any man who shows her some affection. Despite having nothing in common with established notions of movie stardom, Pacino radiates star quality from the first moment we see him. This role would lead immediately to his breakthrough in The Godfather. Kitty Winn is even better, in that we learn so much about her character with so little in the way of exposition. Helen is an observer, not a talker, and she’s sufficiently open-hearted to be casually used by Marco and to accept the pathetic group of junkies as her substitute family. It’s almost not a matter of choice — the place and the lifestyle guarantees becoming an addict and spiraling toward the drain. Her cosmic descent into misery is a process of cruel disillusionments. Helen may exhibit a low-self esteem, but she shows amazing strength hanging on to her man; the ultimate horror comes when she has no choice but to betray him as well.

The Panic in Needle Park takes us to a place we’ve (hopefully) never been. Although we soon know that a happy outcome is out of the question, we never give up hope for our lost lovers. Al Pacino and Kitty Winn are so engaging that the depressing aspects of the story do not make us turn away. We care and we want to stick around to see what happens. The show finally brings Helen and Bobby to a place where a relationship seems impossible, yet all they have is each other.

The movie shows what looks like real drug use, in the filthy rooms of cheap hotels that turn out deadbeats and impound their possessions. Bobby has to deal his drugs out of his pockets, for there are no safe hiding places for drugs or the money he earns by selling them. The only aspect the film can’t quite convey is the non-hygienic living conditions — these people can’t be smelling very good, at the very least.

In the supporting cast are Alan Vint and Michael McClanahan as Bobby’s addict friends. Another addict played by Warren Finnerty was part of the ensemble cast of Shirley Clarke’s earlier show about guys waiting for their fix, The Connection. Joe Santos is a cop and Paul Sorvino a John busted with an addict hooker.

The Twilight Time Blu-ray of The Panic in Needle Park is a very good transfer that puts the lie to the grainy original release prints. Cameraman Adam Holender also shot Midnight Cowboy and so was an obvious choice for this show. The lack of stylization doesn’t allow merely decorative images to distract the viewer from the subject at hand. Although the state of the Upper West Side nails the time period — the area is now quite tony and expensive — the movie feels like it could be happening now.

Likewise Jerry Schatzberg uses no music at all — no film score, no source music. Twilight Time can still include an Isolated Score Track on the disc, because they’ve taken the trouble to obtain an original score by Ned Rorem that was recorded but not used. It comes with a separate text disclaimer. TT is a music-oriented disc label, and this is a very special extra.

David Gregory of Severin directs a pair of featurettes. Director Schatzberg, cameraman Holender and writer Joan Didion relate the making-of story, which began with Didion and Dunne checking into a slum hotel in the area to soak up atmosphere. It’s all very illuminating. Julie Kirgo’s liner notes celebrate this worthy film with more facts about the production background and the miserable state of NYC in the ’70s.

The movie is so well made and especially so well acted that it’s somehow not all that depressing. It’s as honest an account of ‘the low path not taken’ that I’ve ever seen. I think that if it were made now it might encounter a lot of resistance from a distributor hoping for a commercial success. Just for starters, what funding committee would allow the realistic, non-judgmental handling of the abortion theme?