No, not a blind Sherlock Holmes, but a blind Van Johnson who directs his butler, his girlfriend Vera Miles and the London police to thwart a crime based on something he overheard in a bar. Henry Hathaway directs a complicated murder mystery that plays like a combo of Rear Window and Wait Until Dark, with a cranky Van Johnson as the central character. 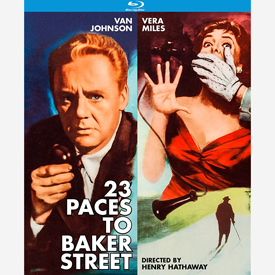 In the 1950s the murder mystery thriller came of age, as creakier older formulas and who-dunnit adaptations gave way to more psychological stories with less need for old mansions and readings-of-the will. Noir-inflected tales, some with hardboiled literary roots, gave us humorously dark thrillers with big stars, such as Alfred Hitchcock’s Rear Window. Val Lewton and Jacques Tourneur’s early experiment in proto-Giallo cruelty The Leopard Man attracted few imitators; I suppose the real game-changer was H.G. Clouzot’s Les Diaboliques from France in 1955.

Not every new thriller was of the progressive variety. Arriving from 20th Fox in 1956, 23 Paces to Baker Street is an upscale program picture, decked out in CinemaScope and attractive color. Director Henry Hathaway was on a four-year international fling, filming in Hollywood, Mexico, Arizona (The Bottom of the Bottle) and in the middle of the Sahara desert. This show is set firmly in urban London. It has a reasonable star name for the marquees: Van Johnson was fading but still notable. Vera Miles was just getting Hollywood’s attention as a possible top star, as 23 Paces was released around the same time as The Searchers. Hathaway doesn’t show exceptional flair for the thriller genre, but he does give the viewer a great feel for London — his color camera wanders into the real streets and alleys, and even into a large department store. Maybe nobody cared about this in 1956, but today these scenes play like a pleasant trip in a time machine. Hathaway pioneered the docu-noir in The House on 92nd Street. All that remains here of that realistic ethos is the desire to stay away from phony back-lot ‘London Street’ sets.

The setup is strangely familiar. A well-to-do American has plenty of free time to investigate a maybe-crime, and his investigation puts him in contact with ‘colorful’ working-class types, dogged police professionals, and underworld villains. The recently blinded playwright Phillip Hannon (Van Johnson) has moved from New York to London, where he more or less hides out in a fancy apartment overlooking the Thames, using tape recorders to work on a new play. Phillip also ran out on his fiancée Jean Lennox (Vera Miles), and she has taken the rather risky, even humiliating step of coming to England to see him. The self-pitying Philip gently maintains that they have no possible future together, but then calls her back when something strange happens.

Phillip is able to walk on his own just far enough to reach the corner pub. While having a beer he overhears a sinister-sounding man identified as ‘Evans’ browbeat a woman into doing something dangerous or illegal involving a child, on the tenth of the month. The mystery takes Philip out of his blindness-induced depression. He tapes his memory of what was said right away, but cannot interest Scotland Yard in the matter. It’s a vague story with nothing to investigate — Inspector Grovening (Maurice Denham) is convinced that Philip has just a case of playwright’s imagination. Jean and the butler Bob (Cecil Parker) do the legwork for Philip, trying to locate possible targets — well-off people with children that might be kidnapped. This leads to the investigation of an Employment Bureau, and Phillip has to pretend to interview a possible Nanny, Miss Alice MacDonald (Patricia Laffan). Bob tracks MacDonald, gets her picture, but loses her in a deserted house. Frustrated when his work doesn’t produce results, Bob takes out an ad to attract the (supposed) criminals, using his own address — putting himself, Bob, and Jean in danger. A kidnapping scheme is afoot, and the ruthless ‘Evans’ behind it is willing to kill to keep it a secret.

The English contingent of the cast is certainly top-rank. Cecil Parker is given more to do than usual, running around in the rain trying to snap ID photos. The delightful Estelle Winwood plays a charming bartender at the Eagles pub. Engaging thug Liam Redmond runs a con game on Phillip, leading him to a bombed-out building where a fatal ‘accident’ can be arranged. There’s also Natalie Norwick, an actress brought from America to play Janet Murch, the real nanny being strong-armed by Mr. Evans to facilitate the kidnapping. 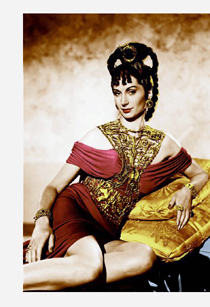 The most impressive cast member is Patricia Laffan, an unusual beauty who is dazzling as Nero’s mistress in the classic Quo Vadis (right → ), and who plays the title character in the absurd yet fascinating Sci-fi bumbler Devil Girl from Mars. She’s tall, with unusual but striking looks, a bit like Rita Gam or Kathleen Byron. As expected, there’s more to Ms. Laffan’s prim nanny than meets the eye; it’s too bad that the plotting doesn’t give us enough of her.

Without its fancy local scenery and the upscale cast, 23 Paces to Baker Street could be a generic TV mystery, slightly more complicated but not more convincing. It has always been compared to Hitchcock’s Rear Window, in that yet another handicapped man must engage his sweetheart to help uncover a crime that he’s intuited but cannot prove. Taking into account pulp magazine stories, TV shows and other movies, it’s unwise to say that anybody copied anybody. The credited source book for 23 Paces was published in 1938.

The show may also remind viewers of the 1967 jeopardy thriller Wait Until Dark, especially when Van Johnson’s Phillip finds himself darkening his apartment as a defense against a murderous intruder. The idea of course, is that a blind man has a chance against an adversary when the lights are out. Although the violent confrontation is fairly well managed, it hasn’t nearly the impact of the Alfred Hitchcock or Terence Young films. Possibly hampered by the constraints of CinemaScope, Hathaway keeps most scenes fairly wide; the camera positions seem limited and there are no unusual angles. Seeing so much of Philip’s apartment during the final struggle, makes us think that there must be some light in the place for the killer’s eyes to adjust to. And how can a blind man be certain that he’s extinguished all of the light sources in a room he’s never seen? (oh, give it up, Savant).

The same goes for Philip’s broad balcony with its spectacular view of the river. Surely he could have saved some rent money with an apartment on a dull side of the building… it isn’t like he can fully appreciate the scenery. Or is that observation prejudicial against sightless people?

Van Johnson has always been a nice enough guy, yet something of a romantic dud when paired with exciting actresses. He and Esther Williams always looked as if their ultimate expression of love would be to pose in the same swimsuit catalog. Johnson’s teaming with Irene Dunne in A Guy Named Joe never worked for this viewer, and not just because she’s almost twenty years his senior – what could that superlative woman see in this guy? Van Johnson worked with Elizabeth Taylor several times, and I suppose some of her sex appeal might have rubbed off. But he seems a whining smart aleck in Brigadoon and a soulless cipher in The End of the Affair — how can anyone not catch fire with Deborah Kerr nearby? He’s much more successful when mated with Jane Wyman in Miracle in the Rain, where his nice-guy manners seem heaven-sent to raise the spirits of an unhappy introvert. In 23 Paces, Van Johnson’s Phillip is a borderline jerk,  the kind of fellow who makes other people suffer for his personal problems. When his friends risk their necks to help him recover his morale, he just puts them in more danger. The biggest drawback to 23 Paces is that Johnson isn’t particularly likeable.

The ‘not likeable’ element certainly applies when we realize that Philip is never honest with Jean. When he claims he’s no longer interested in her he’s absorbed in self-pity, and is lying to save face. When Philip thinks a killer is about to arrive, he feigns anger to send Jean away — he doesn’t even trust her enough to be honest about who is and who isn’t in danger. What kind of future will they have if Philip reserves the right to be so dishonest, ‘for her protection?’

Vera Miles barely gets a close-up yet radiates intelligence and concern in all directions. No wonder Alfred Hitchcock gravitated toward her — she was the perfect replacement for Grace Kelly. Ms. Miles would have been a very different ‘binary’ heroine for Hitch’s Vertigo, had film history taken a different path. If ‘twin casting’ hadn’t been overdone, Ms. Miles might have done wonders as both Crane sisters in Psycho.

Overall, the film feels a little stage-bound yet makes up for it in the exteriors. I realize that Van Johnson still has many fans, so if he appeals this is a perfectly adequate murder thriller.

The KL Studio Classics Blu-ray of 23 Paces to Baker Street can boast an attractive scan — the picture hasn’t faded, and the CinemaScope and color images filmed in London are entertaining in themselves. The Fox MOD series put out a pan-scanned disc a few years back, which is less than worthless; I hope that the Blu-ray boutiques continue to pick up odd pictures that Fox has mangled on DVD, like Michael Sarne’s Joanna and George Cukor’s Justine.

Leigh Harline contributes a smooth, engaging music score for the picture. The soundtrack quality is excellent. As is their new norm, Kino Lorber provides an English subtitle track.

For extras we get some trailers plus a welcome audio commentary from the film expert Kent Jones. His talk is on the slow and halting side, but he offers good information overall. He begins with a nice anecdote about producer Henry Ephron and later on provides a great deal of background on director Hathaway.

Just for the record, Philip Hannon’s apartment is near a Baker Street, and the ’23 paces’ is how he measures his walk to the corner pub. There is no apparent story connection with Sherlock Holmes.