A look at the art photography of Bunny Yeager, starring Bettie Page? We can think of less pleasant ways to pass the time. Savant raises his standards to check out what’s happening in the disc section behind the gray curtain, and finds that the fringe product suppliers are up to their old tricks. 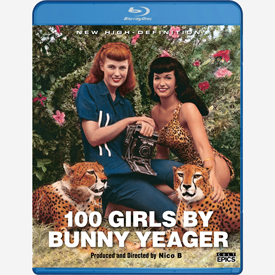 It doesn’t take long to sort out 100 Girls by Bunny Yeager, a new Blu-ray release from Cult Epics. An instinctive glamour photographer, Ms. Yeager is best known for her pretty images of fresh-faced nude models, taken mostly on the beach near her Florida home. Sort of the Erin Brockovich of nude photography, Bunny was a practical gal who kept it clean and honest and did not put on airs of artistic sophistication. She sold to girlie magazines in the 1950s, and then scored a major comeback when quality skin art began receiving serious critical attention. In everything I’ve ever read about her, she comes off as an earnest girl making a living on the cultural margins. An ex-beauty contest winner and model, Yeager found herself more interested in what her photographers were doing than actually posing for pictures.

Because Yeager was a woman, more potential models were willing to trust her — especially beginners. Few modelsing assignments would seem less secure than to travel across the country to be photographed nude by some man she has never met. Ms. Yeager’s operation was always tiny. If she used camera assistants she doesn’t mention them; the quality of her pictures would indicate that she probably had help, at least with reflectors. And of course someone to wrangle makeup and hair for the models — it gets windy on those beaches. What sticks in the mind with Bunny Yeager is the personality she projects in the occasional photos when she poses with her models. The few pictures we have of male girlie photographers of the 1950s aren’t very inviting, but Ms. Yeager seems personable and happy in her work.

100 Girls by Bunny Yeager isn’t much of a disc. It is billed as a new 2K transfer from original 16mm film but the quality is not particularly good. The main show, which is only forty-something minutes in duration, is just a ‘filmization’ of one of Ms. Yeager’s nude art books, 1965’s 100 Girls: New Concept in Glamour Photography. The book presents a full hundred of Ms. Yeager’s early models — dazzling natural beauties, for sure — in high-quality B&W reproductions. Notes from Bunny name each model, say where she was from and add an extra comment or two. The famous Bettie Page was just one of many that came before Bunny’s camera; she passed through Florida when her regular NYC Irving Klaw was having legal trouble, or so Bunny says. The photos of Page are in the same Yeager vein of fresh-faced innocence, sin ropa. 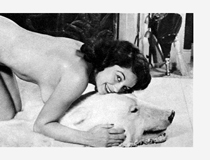 The show is given an original release date of 1999. It does nothing more than point a 16mm camera at a copy of Yeager’s book, reframing the photos therein. Ms. Yeager’s voice is heard reading what was probably the original text copy on each page: “Dottie Parks came from Detroit, was a good model, took instructions well, was a natural, was shy,” etc. The, ‘took instructions well’ judgment is repeated quite a bit; I can see how important it is to respond intelligently when asked to move a foot or adjust this or that. Slopped onto the audio track are some generic licensed music cues, playing as background wallpaper. The mix is barely adequate, with Bunny’s voice sometimes sounding muffled. Bettie Page is only one model in a hundred, and is only on screeen for a short time.

Most of the photos are in B&W. The color images associated with the package cover — the shots of Bettie with the big cats — do look quite good. Other color shots (presumably from the book too) aren’t that great. The 16mm photography is properly focused but naturally grainy. Unfortunately, some flaw along the way puts a constant pulse in the contrast, which shows up as almost a flicker. My guess is that this ‘filmization’ of the book was done with a simple Bolex camera in a home setup, not on pro equipment. The image is steady and that’s about it; we’re always aware that a slightly tall format is being filmed with a more square-ish 16mm frame. Frankly, the way to do this show now would be to scan the images and composite them digitally, adding moves and optimizing their visual appearance. What we have here is a klunky old show being repurposed for a new product. 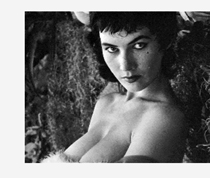 Every few minutes the ‘take pictures of pictures’ format is interrupted with clips from two of Bunny Yeager’s attempts at filmmaking, when she teamed up with nudie director Barry Mahon, best known for the awful releases Cuban Rebel Girls, The Dead One and Rocket Attack U.S.A. We see scenes from Yeager and Mahon’s Bunny Yeager’s Nude Camera (1963) and Bunny Yeager’s Nude Las Vegas (1964). The direction and acting is awful. In each case young women are shown deciding to pose nude, with Bunny on hand to encourage them (“You’ll make money!” and to convince their lunkhead boyfriends that it’s all on the up and up (“Gee Dottie, I didn’t like the idea at first, but you’re really pretty in these pictures!”). As they were filmed by the triple-Z director Mahon, the movies are intolerable even in these short clips — even the personable Bunny comes off as a stiff. Completely faded prints were used, so the clips look simply awful, even though we can tell that the source was 35mm.

So what we have is a book turned into a movie, which might not have been a bad idea had Cult Epics’ put some effort into the release. The original photography is certainly attractive, and seeing it on a large home screen is a different experience than thumbing through a picture book.

The seventy-minute running time listed on the disc cover is reached by adding up the extras. Bettie Page Uncovered: The Unknown Photographs of Bunny Yeager is a 2016 professionally shot HD short subject that covers the opening of a photo exhibit in Avalon on Catalina Island. It’s mostly a speech delivered by curator Helmut Schuster. The virtual photo exhibit extra does for the exhibit what the main feature does for the book — the HD cameraman simply shoots the photo displays on the walls.